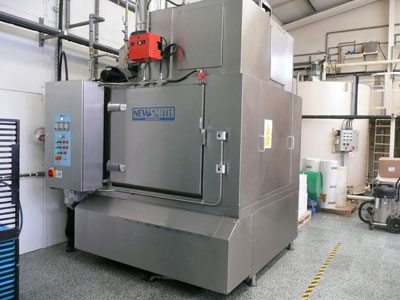 Each Newsmith mould washer is a bespoke machine, with racks built to customer specification, allowing the Batch Galaxy to accommodate all types and sizes of polycarbonate and vac-formed moulds as well as plaques, containers and general utensils. Requiring only one operator, the Batch Galaxy process involves a recirculated hot detergent wash followed by a fresh water rinse. A drying cycle follows, allowing clean and dry moulds to be unloaded quickly and efficiently. Occupying a minimum of floor space, the Batch Galaxy achieves a level of output and effectiveness that only larger machines are able to replicate.

The Batch Galaxy is a signature product in the varied range of Newsmith’s industrial washing machines; alongside the Panamatic series of utensil washers, the Silver Series basket washers and the Soaker Hydro crate washing systems.